Will Europe please raise its hand!

Europe - What is it? A land mass (plus a few islands) stretching from Portugal to the Russian Urals? Or to the Turkish Bosporus? A continent with a common history? A common language, culture, religion? A common anything?

Most members of the European Union assume Europe is their exclusive club of going-on 25 countries. A Briton goes there on holiday. People from a wannabe EU country know that Europe is not synonymous with the Union, but they too are Europeans. Or are they? The rest of the world thinks they are, it's mainly EU members who don't. Indeed, it's the rest of the world which provides a European identity to people from the "bits of Europe beyond the EU" (Michael Portillo).

"Desperately Seeking Europe" contains 37 contributions from internationally renowned politicians, sociologists, economists and writers, all of whom have their own opinions on Europe, its role in the world, its future. Europe is at a critical stage of its development; 2003 will be a decisive, possibly fateful year. Europe urgently needs to discover itself. This book is a timely, challenging and thought-provoking read.

The collection of original contributions presented here was solicited by the Alfred Herrhausen Society for International Dialogue. The Herrhausen Society was set up in 1992 by Deutsche Bank and provides a forum for examining socially relevant issues, identifying the problems and discussing their possible solutions.

Through the eyes of the outsider

Europe and the 9/11 license

From Russia with love

The Chinese view of Europe

The post-war scientific renaissance in Europe

The shape of the Union

Plea for an untidy Europe

Central Europe returns to the fold

A dream in the making

Between musk and must: Europe of the Eastern Europeans

The roots of European identity

The diversity of Jews in Europe

Islam in Europe: confrontation or embrace?

Workaday Europe, soapbox Europe: who will close the gap?

Cosmopolitan Europe: a confederation of states, a federal state or something altogether new?

The calligraphy of history

Reform and proximity: the European Union

Europe's constitution in the making

France and Germany: the odd couple or future motor of an enlarged Europe?

Europe - a continent for consumers

The splintered plinth of Europe

A longing for metaphysics: Europe and its literature 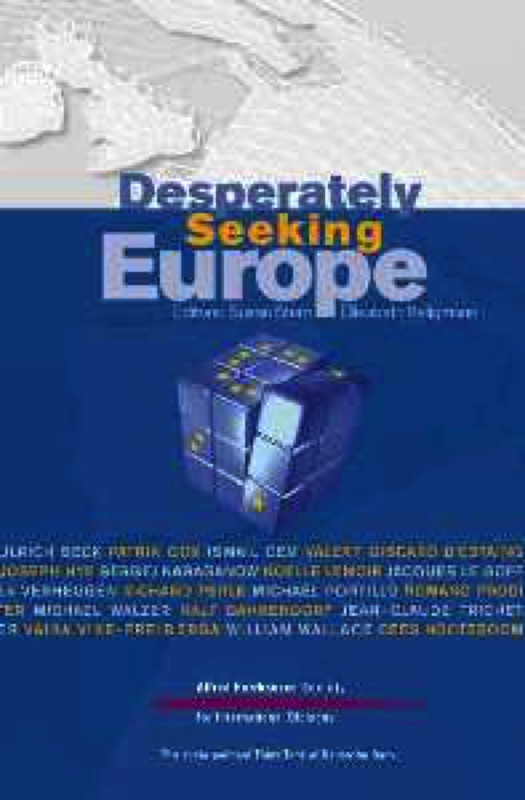