Dyes in History and Archaeology 16/17

Interest in all aspects of dyestuffs has grown considerably since an informal meeting of researchers twenty years ago developed into the annual meetings of Dyes in History and Archaeology, with the journal of the same name publishing a selection of papers presented.

Analysis has revealed that the early 20th-century clothing and textile designer, Mariano Fortuny, used natural dyes for his glorious silks and cottons. Natural indigo is still used in some parts of the world, but dyeing with it is harder, less pleasant work than is popularly supposed. Species of Coleus - one of which is the flame nettle, a popular houseplant in the West - are used as sources of red, blue, purple and green dyes in Papua New Guinea and other parts of Asia. Research into the history of dyestuffs covers many disciplines and their chemistry is also of fundamental interest: the development of synthetic dyes was a breakthrough for chemical technology and industrial processes, and analysis has enabled the dyestuffs used on historical textiles and in pigments used in paintings to be identified.

These topics were among those presented at the 16th meeting, held in Lyons in 1997, and the 17th meeting, held in Greenwich, London in 1998, and discussed in the papers included in this book. They reveal the variety of disciplines with a common interest in this fascinating, colourful world.

Plant Dyes: from archaeology to industry

The technology of silk dyeing by cochineal. II. The experimental investigation of the influences of types and concentrations of cations

The technology of silk dyeing by cochineal. III. The influences of pH, water quality, cream of tartar and oak galls

Colorants used in the material culture of Papua New Guinea

Dyeing with indigo and mud in Senegal and Mali

The last indigo dyer in Tunisia: technology and quality control

Indigo and the 40 robbers: romantic transfigurations of the blue-printer's trade in modern society

The synthesis and properties of 6-bromoindigo: indigo blue or Tyrian purple? The effect of physical state on the colours of indigo and bromoindigos

The microbiology of the medieval woad vat (poster presentation)

The possibility of differentiation and identification of red and blue 'soluble' dyewoods: determination of species used in dyeing and chemistry of their dyestuffs

The Dye of Rubia peregrina. I. Preliminary investigations

The colouring of alum-tawed skins on late medieval books

Influence of fungicides and insecticides on colour materials

Recent publications concerning the analysis and history of dyes: abstracts of books and papers received since 1997

This work provides conservators with valuable information and insight into textile dyeing...This book has a little of something for everyone: conservators specializing in books, textiles, objects, and ethnographic materials, as well as conservation scientists, curators, and people interested in technology. This variety is almost certainly a result of the diverse backgrounds of the authors: dyers, historians, conservators,chemists, biologists, and curators, all united by their interest in traditional dyestuffs. The other striking aspect of the book is its truly international scope, in terms of both topics covered and the nationalities of the authors. Clearly there is world-wide interest in the history and anlysis of dyestuffs, and it is encouraging to see the interdisciplinary approach taken in so many of the articles.

On [Penelope Walton Roger's] retirement following publication of the papers from the 15th meeting a new publisher and editor were called for and these two attractive and excellently edited volumes are the first results. 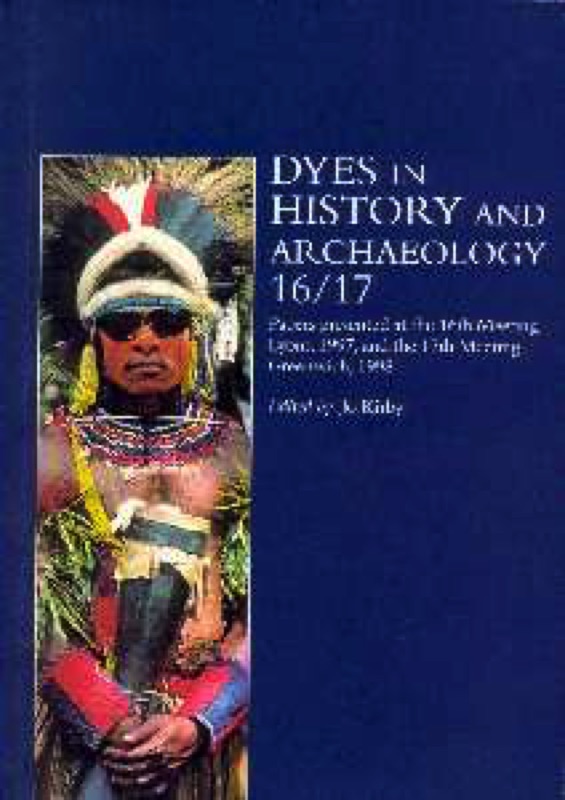