Dyes in History and Archaeology 20

Until the 19th century, the dyes available to decorate all the objects of art and everyday life were obtained from naturally occurring raw materials. It was well known that some were better than others and from early times the necessity of assessing quality and avoiding falsifications was recognised. Following developments in synthetic organic chemistry, a vast number of new dyestuffs appeared; these also varied in quality and permanence and required testing. Historians, archaeologists, chemists and dyers then began to ask how the dyers of earlier times and other civilisations had carried out their craft. Today, conservators have questions too: how the dye and its method of application may affect the state of preservation of an object, and also the remedial measures that are necessary.

Over the centuries, analytical methods have developed from simply moistening the raw material with saliva to assess its dyestuff content to the identification of a dyestuff molecule by mass spectrometric analysis. Methods for the examination of dyestuffs have evolved in parallel with developments in analytical chemistry and ever more detailed information becomes available as techniques improve. The development of non-destructive methods has a particular relevance to historical artefacts and may grow in importance in the future.

These points are discussed in the papers presented at the 20th Meeting of the Dyes in History and Archaeology, held in 2001 at the Instituut Collectie Nederland, Amsterdam. They are illustrated further by discussions of the use of particular analytical methods and the development and use of a range of dyestuffs from shellfish purple to Malachite green; from Indonesian dyes to food colorants. Historical and conservation issues are also discussed including dyeing of prestigious textiles during the Nara era in Japan by a method that was subsequently forgotten, and the conservation of two historical Canadian textiles.

Components of mordants and the silk fabrics treated with them
Masako Saito, Mizuho Uehara and Kazuki Yamazaki

Historical dyes in Poland and their revival
Katarzyna Schmidt-Przewozna

Processing of indigo plants and dyeing with indigo in Japan: impressions of a visit in autumn 2000
Ursula Klingelfuss-Schneider

The first optimal all-murex all-natural purple dyeing in the eastern Mediterranean in a millennium and a half
Zvi C. Koren

It happened by chance: the discovery of Malachite green
Chris Cooksey and Alan Dronsfield

Recent publications concerning the analysis and history of dyes: abstracts of books and papers received before July 2003
Compiled by Penelope Walton Rogers

...a copy should certainly be held in the new central library…good reading for...[dyers] who are interested in the intricacies of dyeing history and technology. 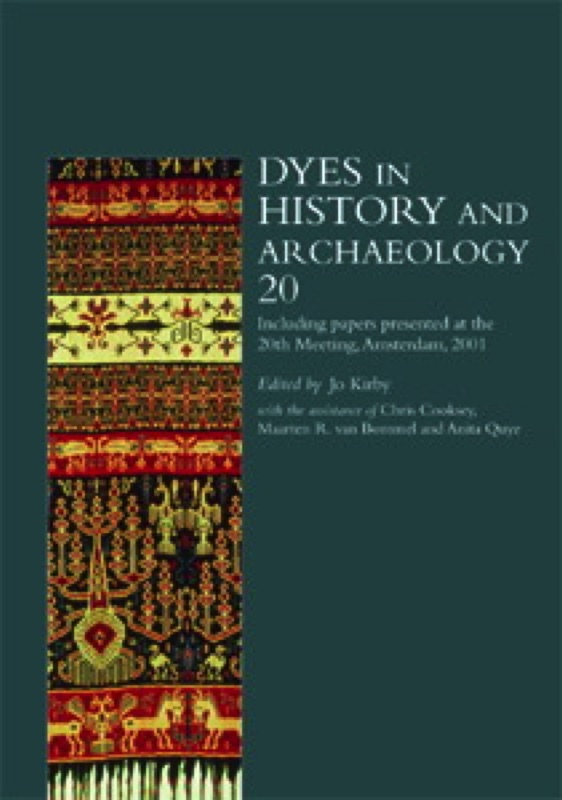