Dyes in History and Archaeology 21

The trade in dyestuffs has played an important role in the economic history of many nations. In medieval Europe this is demonstrated by the important place held by woad in the economy of many countries, but while the woad industry of Toulouse or Erfurt is quite well known, that of Catalonia and Roussillon is rather less familiar. Other aspects of medieval woad dyeing are equally interesting: it is known that the vat contains indigo-reducing bacteria, but how do these bacteria interact with the indigo to make the process work? In fact, identifying the dye present in fragments of aged or degraded textile or in a tiny pigment sample is only half the battle: we are still left wondering how the effects revealed by the analysis were achieved. Thus, madder was widely used in Roman and Coptic Egypt, but which madder? How do the red pigments used to paint the sumptuous glazes on 15th- or 16th-century European paintings relate to the textiles dyed with the same dyes?

Some classes of works of art present particular problems because no sample may be taken or because the materials used in the construction of the object are poorly understood or particularly intractable. Many Japanese objects of cultural heritage can only be studied by non-invasive methods, but sometimes this study can be greatly assisted by even a limited amount of analysis, as demonstrated by the discussion of braids used in Japanese armour. The organic pigments used in illuminated manuscripts present a similar problem as they are often difficult to identify by non-invasive methods. Some, such as the anthocyanin blues and exotic dragonsblood, are also not particularly well characterised while others, such as the expensive shellfish purple also found on Roman and Coptic textiles, are tantalisingly rare.

These topics are among those discussed in the papers presented at the 21st Meeting of Dyes in History and Archaeology, held in Avignon in 2002, together with discussions on a range of topics from theoretical studies of alizarin complexes to the use of logwood as a biological stain and the use of dyes in West Africa and 18th-century Poland.

The biblical dye tekhelet and its use in Jewish textiles
I. Irving Ziderman

The identification of purple in manuscripts
Cheryl Porter

Sanguis draconis, dragon's blood: the use and analysis of a manuscript illuminators' colorant
Arie Wallert and Maarten R. van Bommel

Monitoring of Damage to Historic Tapestries (MODHT): a newly initiated EU project
Anita Quye, with an Addendum by Kathryn Hallett

Computation of a visible light absorption spectrum, a semi-empirical quantum mechanical approach: application to the colour determination of alizarin complexes in solution or chemisorbed onto cellulose
Francois Delamare and Bernard Monasse

In the circle of colour: natural dyeing of flax, silk and wool (poster presentation
Katarzyna Schmidt-Przewozna and Witold Przewozny 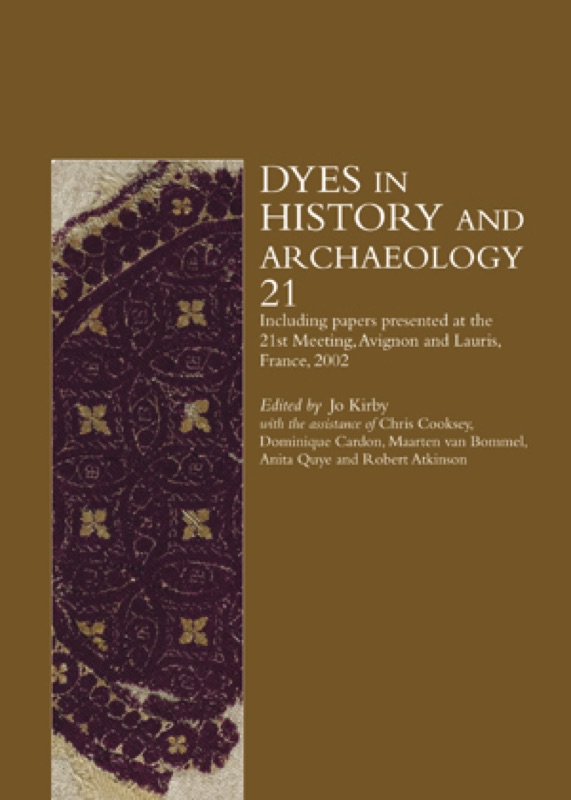