The papers in this volume, presented at the Royal Institute of Cultural Heritage (KIK-IRPA) in Brussels in November 2012, focus on major transformations of works of art, such as updates of format, function, iconography or appearance and their documentation by historical documentary sources. They cover a wide range of art, periods, sources and approaches, from Dioscorides to contemporary installations: Tinguely's explosive Homage to New York; the evolution and transformation of harpsichords in France in the seventeenth and eighteenth centuries; the art of anatomical wax models in Spain and neo-Gothic polychromies. The skilful combination of source research with experimental reconstruction and analysis is illustrated in studies of anthocyanin colorants in medieval European illuminators' workshops, and of tempera paint around 1900. Research on artists' materials such as vermilion and zinc white, refers to patents, inventories, diaries and chronicles. The interpretation and transmission of sources in central to several papers. Innovative databases of art technological sources are also presented.

3. An elusive colorant: availability, preparation and use of anthocyanin colorants in European medieval illuminators’ workshops - Sylvie Neven and Jana Sanyova

6. 'This they use in Madrid': the ground layer in paintings on canvas in 17th-century Madrid - Maite Jover de Celis and Dolores Gayo

7. Van Dyck and de Mayerne: a cautionary note regarding the manuscript - Rica Jones

9. Evolutions and transformations of harpsichords in France in the 17th and 18th centuries - Christine Laloue and Jean-Philippe Echard

10. Manufacturing techniques and the art of wax modelling: from the sculptor's studio to the anatomical workshop - Alicia Sánchez Ortiz and Sandra Micó Boró

11. Combining different types of sources for a better understanding of tempera painting around 1900 - Patrick Dietemann and Wibke Neugebauer

12. Interpretation of documentary sources for the industrial preparation of ‘zinc white’ in the 19th century - Nicholas Eastaugh, Jilleen Nadolny and Weronika Swiech

18. Glass and parchment with a view: oil paint and the imitation of (stained) glass windows 1400-1600 - Marjolijn Bol, Henk de Groot and Arie Wallert

20. ‘A substance that serves all paints’: interpreting a technical recipe from Sloane 345 - Indra Kneepkens, Ronald de Jongh and Arie Wallert

22. Transformed altarpieces in the age of Baroque in northern Italy - Orso-Maria Piavento

24. Technical examination of Daubigny’s Cliffs at Villerville-sur-mer, or new light on the history of Impressionism - René Boitelle and Alan Phenix

27. Dynamic art technological sources for contemporary work: the artist interview and the installation itself - Sanneke Stigter 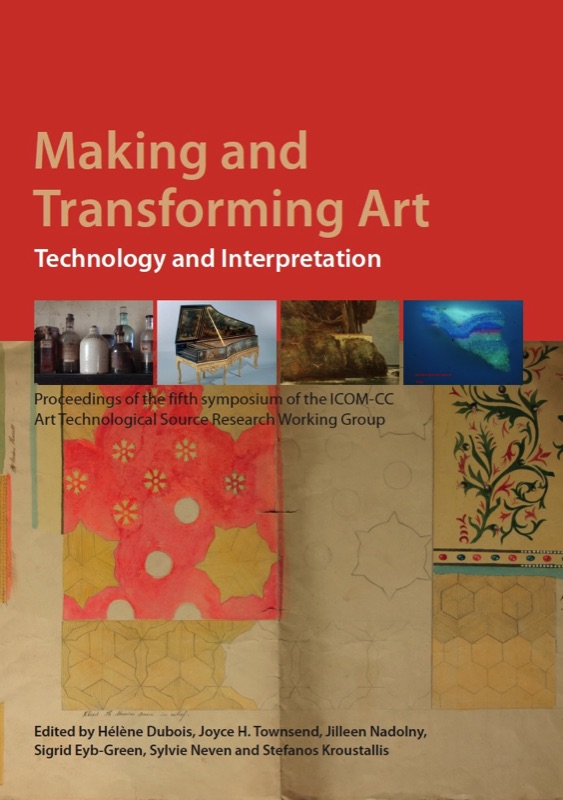