Re-establishing the Links between Archival and Object-based Research

This publication focuses on the interrelationship between archival and bibliographic research and the study of extant objects. Papers consider how archival and bibliographic research can inform our knowledge of textiles and dress in terms of their production, consumption, dissemination and deterioration and in turn, how the study of extant objects can give added depth to this analysis. The authors include conservators, curators, historians and conservation scientists.

These postprints are the third in a series of three volumes of papers emanating from the conferences of the AHRC Research Centre for Textile Conservation and Textile Studies, Textile Conservation Centre, University of the Southampton, and published by Archetype Publications. The themes for the preceding volumes are:

-The Future of the 20th Century: Collecting, Interpreting and Conserving Modern Materials (published 2006)

Researching the domestic interior: the example of the 'Chintz Lady', Elsie de Wolfe

'I have bought cloth for you and will deliver it myself': using documentary sources in the analysis of the archaeological textile finds from Quseir al-Qadim, Egypt

What Essex man wore: an investigation into Elizabethan dress recorded in wills 1558 to 1603

Recovering identity: the role of textual evidence in identifying forgotten azlon fibres from the mid-20th century

Unlocking one facet of Henry VIII's wardrobe: an investigation of the base

A portrait, two dresses, two samplers and a burning steamship

Undated, unattributable and unfinished: forgotten samplers and their re-evaluation through archival research

Tracing textiles in trade: from account books to patents

Costume at the court of Cosimo and Eleonora de Medici: on fashion and Florentine textile production

Analysing patents and objects: a preliminary investigation into the crinolines of W.S. Thomson

Patents as a source of information about synthetic textile dyes

The interaction between East and West

A paradise of pretty girls: the kimono and perceptions of Japan

Dragon robes and prairie ladies: the incongruity between archives and artefacts

Domesticity and gender explored and challenged

'A Linnen Pockett a prayer Book and five keys': approaches to a history of women's tie-on pockets

The antimacassar in fact and fiction: how textual resources reveal a domestic textile

Thistles and Thrissels: Scottish Covenanting flags of the 17th and early 18th century

Understanding the full story: acknowledging intimate interactions of textiles and text as both help and hindrance for preservation

The interaction of textile and text: the conservation of a mid-16th-century chemise binding

The investigation and documentation of a communion table carpet in Corpus Christi College, Oxford

Who put the text in textiles? Deciphering text hidden within a 1718 coverlet: documentation of papers hidden within an early 18th-century coverlet using transmitted light photography

Objects without documentation: the role of conservation science in revealing more about these artefacts

This publication deserves a much wider audience. Books of essays of this calibre are not usually a popular publishing item. 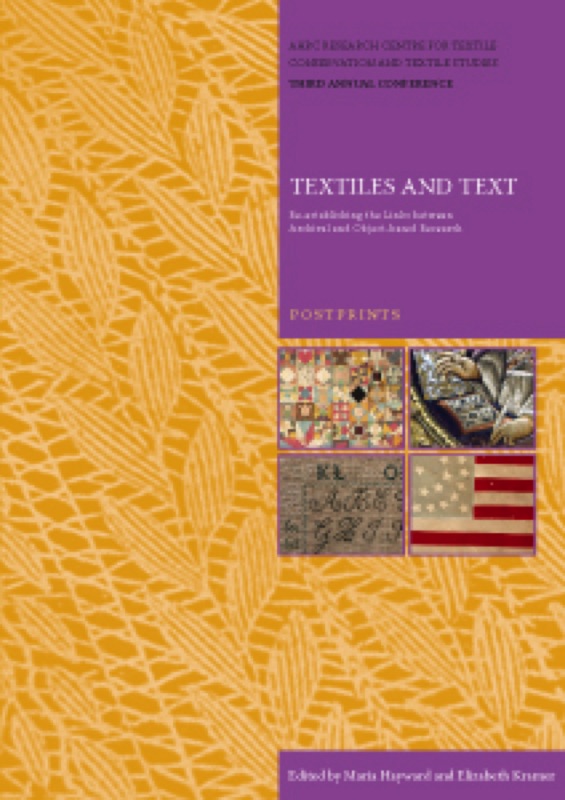